We had the pleasure to give a DIY Masterclass on September 20th in Berlin at SUPERMARKT, which is a lovely co-working and event space. The masterclass was called Sonic Exploration Into Electronic Textiles and about ten people participated in making crocheted sensors which could be used for altering sound.

The workshop started with a brief introduction to e-textiles, after which we learned few basic crochet stitches. The idea was to crochet a piece which contained both regular yarn and conductive yarn, and to connect it to a pre-made oscillator circuit. The oscillator circuit produced a constant tone, and the crocheted piece provided an interface for changing the pitch by stretching or squeezing the textile. These movements lowered the electrical resistance in the circuit, resulting in higher pitch. It was thus possible to play different tones with the noisy crochet by stretching, pulling, squeezing, pinching and folding it in different ways. See our DIY section for instructions on how to make one yourself.

Many thanks to the SUPERMARKT crew and the participants for the nice workshop atmosphere! Thanks also to your friendly yarn providers at Wollen and Statex!
http://vimeo.com/75168925 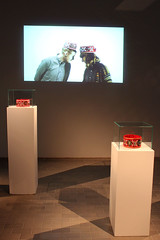 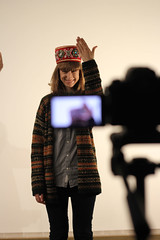